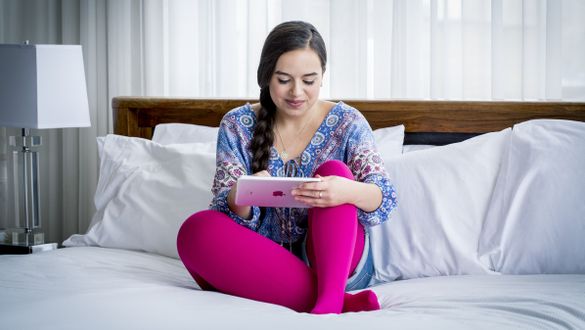 What is a lymphoedema?

Lymphoedema mainly occurs in the arms or legs: if the lymphatic vessel system is damaged, lymph fluid accumulates in the limbs, causing them to swell. The swelling is chronic, but with the right, long-term treatment those affected can achieve very good therapeutic success.

Causes of lymphoedema – how does lymphatic congestion occur?

The lymphatic vessel system is part of our body’s immune system. Similar to hazardous waste collection, the lymphatic vessels filter and dispose of substances dissolved in liquid – the “lymphatic load” or “lymph” for short. These include, for example, blood proteins, fatty acids and metabolic or inflammatory products. If the lymph drainage is disturbed, the lymph accumulates in the tissue – usually in the legs or arms. As a result, fluid accumulates in the interstitial tissue.

Primary lymphoedema may also be a component in syndromes such as Klippel-Trénaunay syndrome.

This form of lymphoedema refers to oedema that only occurs in the course of life and is not congenital. Secondary lymphoedema results from external influences:

"After the operation came the lymphoedema – and compression."

One fat leg and one thin leg: Parkes-Weber syndrome

“Compression is part of my life.” – patient with lipo-lymphoedema

Lymphoedema after breast cancer: “One should always make the best of everything."

Take responsibility for your own happiness!

Take permanent swelling of your arms or legs seriously. The following signs may indicate lymphoedema:

The so-called “Stemmer's sign” is a reliable way of detecting lymphoedema. Try to lift a fold of skin, for example at the toe:

They will initiate appropriate therapies. The earlier lymph patients start their treatment, the more likely it is to keep the oedema under control in the long term.

Quick test: lymphoedema – yes or no?

Do you have a swelling on your body and suspect lymphoedema? Then take the following test. The result can give you an initial indication as to whether you have lymphoedema. Please note that this test does not replace a visit to the doctor or a professional diagnosis.

Risk factors are all influences that affect the lymph nodes and vessels. Factors such as age and gender can influence the development of lymphoedema.

In some cases, lymphoedema arises from a previous venous disease. During cancer therapy, patients' lymph nodes are often irradiated or removed. This affects the entire lymphatic system and may also lead to oedema.

Swellings occur during the course of the day, which are completely or partially reduced when the patient is elevated. When pressure is applied to the tissue, a dent is formed which remains for some time.

The swellings remain even during longer rest periods. The skin is hardened and raising the arms or legs does not bring any relief. Dents are difficult or impossible to push in.

There is swelling with skin changes (e.g. small blisters from which lymph fluid leaks). In the past, this more pronounced form of such swellings was also called “elephantiasis”.

Chronic venous diseases can also be the cause of secondary lymphoedema. This is known as phlebo-lymphoedema. With chronic venous insufficiency, there is increased fluid leakage into the tissue. Initially, the lymphatic vessel system removes this increased amount of fluid. If the lymphatic vessel system is permanently overloaded, it can lose its function resulting in protein-rich oedema.

You cannot prevent lymph congestion caused by primary lymphoedema because the malformation of the lymph vessels is congenital. You also do not have any influence on whether or not lymphoedema develops after a medical intervention or after radiation.

How to relieve your lymphatic vessel system

Fundamentally you should avoid all factors that can cause an increase in tissue fluid or make lymph drainage more difficult.

Factors that strain your lymphatic system – what you should avoid

Diagnosis and therapy: How can lymphoedema be treated?

Lymphoedema is a chronic disease and cannot be cured, but with the right, long-term therapy you can achieve very good success in terms of decongestion and maintaining the outcome. The most effective method of treatment for lymphoedema is complex decongestive therapy (CDT).

Complex decongestive therapy (CDT) as a basic therapy for lymphoedema

The first phase of Complex Decongestive Therapy usually takes several weeks. The maintenance phase only begins when no further reduction in circumference is achieved in the affected body regions.

The maintenance phase of CDT aims to maintain the successes from the decongestion phase and further improve the tissue. Measures in the maintenance phase are usually continued for the rest of the patient’s life. In phase 2, the components of CDT are used more or less frequently – but regularly – depending on the diagnosis.

The five pillars of CDT

In the decongestive phase, a lymphological compression bandage is applied after each MLD. This is adjusted to the daily changing circumferences of the affected limbs. Without compression, the affected extremity would quickly swell again.
In the maintenance phase, flat knit medical compression stockings are used to prevent the recurrence of oedema. These are prescribed by a doctor and are available from specialist medical retailers.

Daily thorough skin care with special care products is essential for lymphatic diseases: the skin is particularly sensitive and has a tendency to become dry and itchy. Infections, inflammations and wound healing disorders arise quickly, because the upper skin layer often is not supplied with sufficient moisture: the skin can no longer perform its natural barrier function. The medi care series may only be used on undamaged skin and is tailored to the needs of compression stocking wearers.

Tip: With lymphoedema therapy, even minor skin irritations should be taken seriously and, if necessary, shown to a dermatologist.

It is important to move continuously – and preferably straight after manual lymphatic drainage and with the compression fitting. Movement supports the optimal effect of compression therapy.

In order to get the best therapy results, the motivation of the patient is also decisive. They need to get involved in the treatment as independently and actively as possible under the guidance of a therapist. This personal commitment requires the patient to be informed and trained to understand the necessity of the therapy components.

Infographic nutrition for lipoedema and lymphoedema
Discover how the right nutrition can contribute to greater wellbeing.

Even small changes in behaviour can improve wellbeing:

Tip: Share information with other affected people, for example in an online forum or in a local self-help group. Lymph patients come together in these places to exchange information and support each other: they share experiences and news about treatment and around everyday life with their disease. In addition, collaborative projects are undertaken and expert lectures are organised.

Depending on the situation, it may be general practitioners, oncologists or specialists and clinics specialising in lymphoedema. When searching for a suitable specialist, be sure to look for “Phlebologist” or “Lymphologist”. Your doctor will prescribe potential therapies (for example lymph drainage or compression stockings) if necessary.

The doctor will prescribe a lymphological compression treatment if the diagnosis is correct. Your legs are precisely measured for the stockings in specialist medical stores.

Lymph network groups exist in many regions. A lymphatic network is a multidisciplinary, interdisciplinary association of all those involved in the therapy: it includes (specialist) doctors, lymph therapists and representatives of the medical specialised trade with a lymphological focus.

Competent support for patients on their way to successful therapy

Lymph networks maintain a constant exchange of experience, they continue to learn from each other and hold educational events for those affected. The purpose of such collaborations is to guarantee a high level of diagnostic and therapeutic reliability through close cooperation – with the aim of achieving optimal treatment results and an improved quality of life for patients.

Research a lymph network in your area online.

Products by medi: Lymphological treatment is as individual as the patients

Every person is different. Lymphoedema patients in particular have different requirements for their compression care depending on their physique, clinical picture and life situation. medi offers individual products that not only meet medical requirements, but also satisfy users' fashion demands: customised, flat knit compression fittings.

Lymphoedema and fashion: individuality and self-confidence in lymphoedema therapy with colours and patterns

medi increases the confidence of lipoedema and lymphoedema patients so they can wear their compression stockings with pride. Colours, patterns and design details create individuality.
Experience our full range of colours, patterns, accessories, design and fashion elements.

Nutrition for lipoedema and lymphoedema: 7 tips for wellbeing