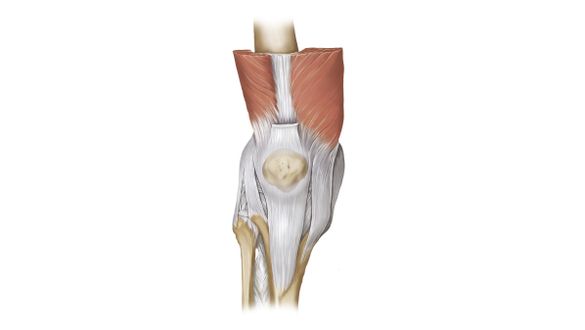 Structure and function: The anatomy of the knee joint

Doctors call the knee joint the articulatio genus. It is one of the largest and strongest joints in the human body. Thanks to its sophisticated design as a rotating hinge joint, the knee is capable of withstanding all loads, large and small, each and every day. We can bend the knee up to 150° (flexion) and hyperextend it up to 10° (extension). It can also be easily swivelled inwards and outwards. Ligaments, tendons and muscles give it stability.

These bones make up the knee joint

The knee joint is essentially made up of three bones: The thigh bone (femur), the shinbone (tibia), and the kneecap (patella). The joint head on the femur has two strong bony projections, the condyles, which are covered with articular cartilage. The articular surface of the tibia is called the tibial plateau.

The menisci (outer and inner meniscus) are made of fibrous cartilage and form the connection between the thigh bone and the shin bone. They also provide better force distribution in the knee. The inner meniscus is fused with the inner ligament.

The knee joint is held in place by a prominent ligamentous apparatus. The ligaments prevent the bony structures from rubbing against each other too much.

Synovial bursa in the knee: Cushioning for bones, muscles and tendons

The knee also contains bursae that protect the joint from rubbing and from pressure during movements of the knee. They are found above the kneecap, in front of and behind the patellar tendon. Bursae are slidable, elastic, fluid-filled "pads" that can become inflamed. An inflamed bursa – or ‘bursitis’ – can be very painful.

A rather special bone: The kneecap – the largest human sesamoid bone

In a sense, the patella acts as a "spacer" between the tendon and the joint, allowing greater leverage and less effort to extend the knee. Moreover, the patella – like all sesamoid bones – prevents the tendons from being damaged by compressive stress when moving back and forth over the joints.

Diseases and afflictions of the knee joint

Falls or accidents often cause injuries to the knee joint. These can occur singly, but also in combination.

The application of strong force, for example an impact with a hard surface, can cause fractures of the bony components of the knee, such as a patella fracture.

Wear and inflammation in the knee can lead to pain. A few examples:

Orthoses for stabilisation after knee injuries

Soft supports for relief and stabilisation of the knee joint