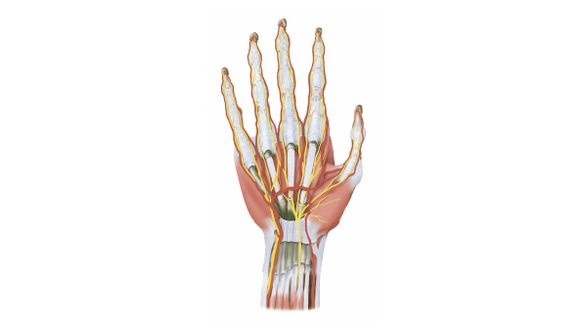 Tendon sheaths – these are tubes of connective tissue filled with a lubricating fluid that surround the tendons like a tunnel. The tendons themselves are covered by a layer of membrane, the epitendineum. If this becomes inflamed or changes due to persistent overstrain, a dragging pain develops along the tendon. The cause is mainly overstraining of the tendon, but an inflammatory joint disorder can also cause the symptoms. The tendons of the wrist are affected most often. However, the symptoms can occur in all other tendons, if they run through a tendon sheath. As a rule, inflammation of the tendon sheath is not caused by an infection, but is the result of repetitive overstrain.

How does the inflammation start?

The tendon sheaths prevent the tendon from wearing down unduly or from being exposed to excessive friction. The inside of the sheath is lined with synovial fluid. This enables the tendon to glide to and fro.

If this ingenious protective system is overloaded – for instance, by too much sport or monotonous PC work – the tendon sheath becomes inflamed. The affected area hurts, swells up and is often red.

The cardinal symptom is severe recurrent twinges of pain. At first, the symptoms occur above all when the joint is moved, later it also hurts at rest. If the corresponding joint is not rested enough or even immobilised, the symptoms worsen. Pressing on the affected site is painful. You may also hear a grating noise when you move the joint.

It is best to avoid repetitive sequences of movements and set up an ergonomic computer workstation. If neither of these is possible at work, take regular breaks.

How can tenosynovitis be treated?

Anyone who has tenosynovitis, tends to keep their hand and arm automatically still. And that's exactly what doctors also recommend that their patients should do.

Acute tenosynovitis (tendovaginitis) generally lasts a few days. Sometimes it becomes chronic and does not clear up for weeks or months.

If the affected site is also swollen and red, cold compresses can relieve the symptoms. Painkillers that simultaneously relieve the inflammation help in the case of severe pain.

In addition to cold compresses and painkillers, supports or wrist orthoses can help immobilize the joint.

Once the inflammation has resolved, the wrist can be used again. In order to avoid overworking it again in the future, we recommend follow-up treatment under the supervision of a physiotherapist.

Supports and orthoses from medi

Products from medi can help in the treatment of tenosynovitis.

Comfortably relieve stress and strains on the wrist

How to stay fit and healthy at work