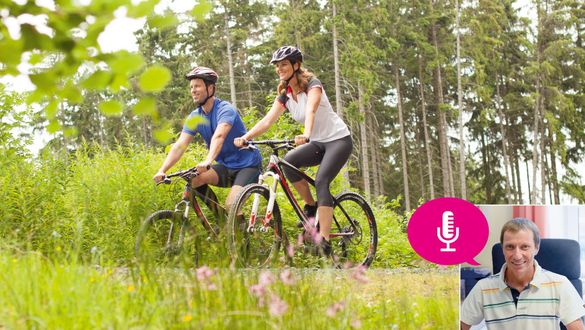 Springtime fatigue: a typical and common form of sensitivity to changes in the weather

People who suffer from springtime fatigue often complain of circulatory problems, exhaustion and susceptibility to infections. The symptoms, which can develop between February and April, describe a typical and frequent form of sensitivity to changes in the weather.

In the interview, Dr Jürgen Zapf, specialist for general, sports and nutritional medicine, chirotherapy and acupuncture in Bayreuth, talks about the medical background to springtime fatigue and gives tips for more energy during the first few months of the year. For many years now, Dr Zapf has been treating people at his practice in Bayreuth, who want to increase their well-being by adhering to a health-conscious lifestyle, special dietary concepts and sporting activities.

Dr Zapf, which processes in the human body lead to this almost endemic springtime fatigue?

"Springtime fatigue describes a constellation of symptoms with the cardinal symptoms of fatigue and reduced physical and intellectual performance - or even a mild depressive mood. These symptoms typically present in March and April: this is when the temperatures as well as the lengths of the days and nights change dramatically in a very short time.

The body reacts to this by regulating the hormone balance and the circulation. And it's just these processes that many people find arduous and tiring".

Do you treat many patients with springtime fatigue?

"Since springtime fatigue is neither an illness nor a medical diagnosis, it is never recorded as an official reason for treatment in a doctor's surgery. However, we do regularly observe an increase in such moods in the early spring.

Above all at a time when we would, in fact, expect the winter depression phase to be over. It is claimed that about 30 to 50 percent of Germans are affected by springtime fatigue, especially people who have rather low blood pressure. Young women have to battle against springtime fatigue more often than men or older people".

What do you recommend to those affected?

"The underlying problem is as follows: humans do not adapt their modern lifestyle ideally to the conditions demanded by their natural environment. In the ideal case, they would spend all day long out-of-doors in the sunlight being physically active. This reduces the production of the sleep hormone melatonin and brings the circulation and blood pressure up to speed.

However, the reality looks rather different. The hours of daylight are mostly spent sitting or standing at work, with artificial lighting instead of sunlight - all this is an obstacle to a rapid adaptation to the "active summer mode".

Which means: get out and move around in the fresh air as often as possible, no matter whether with sports, hiking, strolling around or even working in the garden".

How can we keep our circulation on the move?

"The best remedy for morning tiredness is a cold shower, even if that's difficult at first: showering the arms, legs and upper body with cold water stimulates the circulation. Walking barefoot over dew-drenched meadows in the morning is also suitable for those who prefer a somewhat gentler method".

"The caffeine in coffee and energy drinks and the theine in tea are both stimulants, so they perk us up. In small volumes in the morning, as a lovely cup of coffee or tea, they activate our attention and concentration in a very agreeable way.

However, everyone who battles against fatigue all day long with coffee and energy drinks without treating their bodies to the occasional rest is depleting their powers of regeneration and actually making their fatigue worse. This results in the need to grab a coffee all the more often to avoid a "crash"".

What "power foods" boost our metabolism?

"Everything that mother nature provides that is fresh, colourful and more alkaline than acidic: while our ancestors had to wait a long time for the first harvests, today we have the opportunity to buy fresh foods all year round.

Power food isn't available at the gym, but you can, for instance, buy it at the weekly market!"

When are sporting activities more useful, in the morning or in the evening?

"Moderate sporting activities activate the body without tiring it. Afterwards, the body can switch very rapidly from the sympathetic to the parasympathetic mode, i.e. the recovery mode, within one to two hours. Which is why moderate sporting activities can be done both in the morning and in the evening until about nine o'clock. Then it doesn't disturb our daily work or our ability to fall asleep in the evening.

In contrast, it's better to pursue highly intensive sports during the day, as the body needs several hours to switch to the recovery mode afterwards. Intensive sports in the evening can make it harder to fall asleep and enjoy a restful night. After exhausting training, general physical and mental fitness are impaired for quite some time, so a longer rest is needed after training, even during the day".

What types of sport do you recommend?

"The best sports are those that are done out-of-doors during the day. The actual type of sport is not as important as the intensity and the duration. When the aim is to combat springtime fatigue, the enjoyment and fun in physical exercise are far more important than a purely performance-based mindset.

The options range from games such as football, tennis and beach volleyball to hiking, jogging, cycling, inline skating and even golf, rock climbing and all other forms of movement outdoors".

Do you have any dietary tips for our readers?

"Avoid eating too many cereals, sugar- and fructose-rich foodstuffs, red meat, sausage meat and dairy products. If you now have to ask yourself, if there is anything left at all that you are allowed to eat, you will know that you currently have too many of these foods on your menu.

So it's now time to look around for alternatives: for example, vegetables, salads, plant-based proteins and valuable fatty acids from nuts, seeds and legumes as well as fish, seafood and fruit".

Dr Zapf, many thanks for the interview.

The path the blood follows around the body