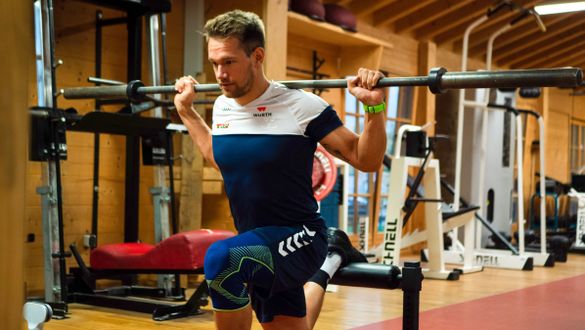 “And then I fight step by step.”

Professional skiing is a uphill battle – Sebastian Holzmann, who secured 11th place in the slalom event at the 2017 / 2018 World Cup, knows this well. Extensive training, mental strength and setbacks are all part of skiing, a sport which the 26-year-old is obviously passionate about. In addition to a determination to constantly grow beyond one's own limits, medical aids can also contribute to success here. With the Genumedi E⁺motion knee support from medi, Sebastian Holzmann quickly felt safe on his skis again after experiencing a torn outer ligament – and is now heading for the top 30 in the world rankings.

Mr Holzmann, at the beginning of the year you tore the outer ligament of your left knee. How did that happen?

“Yes, it was in Schladming in January at the Nightrace, the men's night slalom. Right before the start of the race, I warmed up as usual. This includes lunge-steps with a gentle stretch. All of a sudden I felt a click in my knee and a burning pain, which then disappeared again. My physiotherapist couldn't do much at the time: It was just five minutes before the start and I was in full gear with knee pads, ski boots and the race suit – it's hard for the physiotherapist to see anything with all that on. I decided to go ahead and start, but it hurt a lot after my race. About 15 minutes later, I couldn't even walk properly anymore.”

As a competitive athlete, would you always take part in the race even if you were injured?

“If I had had pain in the medial collateral ligament or the posterior cruciate ligament region, I would have been much more careful. But the outer side is normally not stressed much when skiing. The pain was still bearable. If I had been in really bad pain, I wouldn’t have raced.”

Did you feel restricted during the race?

“The injury was at the back of my mind. I was a little bit in shock. It was the first time that something like that had happened to me, so it of course impacted me mentally.”

How did you deal with the injury after the race?

“A physiotherapist examined me thoroughly and found that there was more movement in the left knee joint. Then I spoke with Dr Peter Brucker, who works with the German Ski Association (DSV). He arranged an MRI appointment for the following day in Munich. The result: The outer ligament was split at the fibula head.”

Which course of therapy did you then decide on?

“My physiotherapist advised me to get a Genumedi E⁺motion* knee support. We wanted to take an active approach to it all. It was clearly unstable and I felt strong pain during certain movements, such as when the outer ligament was under high tension. I could move with a low movement amplitude, i.e. not to the absolute limit, without pain. With my physiotherapist, I practised lunges on a slightly wobbly surface to prevent muscle loss and imbalanced weight bearing.”

Did you feel safer practising lunges on a wobbly surface with the support?

“Definitely! As soon as I put on the Genumedi E⁺motion*, I felt the compression and immediately felt more stable. It made me feel more secure and supported. Wearing the support, I felt that my knee would stay in exactly the right position, so nothing could happen to me.”

So, you immediately began to work on mobility?

“Right, with lots of fascial and muscular therapeutic work. They were short sessions, half an hour at most. I did balance exercises under load on both legs, but without weights: simple movements like a simple lunge up to three or four centimetres before the pain threshold. I didn't go to the limit, but rather stayed in the passive area – and then things quickly got better.”

Did you just wear the support during training or in everyday life too?

“For the first three weeks, I wore it almost all day, from getting up to dinnertime. I only took it off when the knee was completely free of strain.”

What characteristics do you value in an aid that help you to return to sport as quickly as possible?

“Compression is important to me in a support, not least because it gives me that feeling of stability and a sense of security that the leg is well ‘packaged’. I found that to be great with the Genumedi E⁺motion*. The fit was also very impressive, especially during sport. When I went jogging again, for example, I wore the support for safety reasons. It was very comfortable and it didn't pinch the back of my knee, which is great.”

After just five and a half weeks, you’re back on skis. That’s pretty good, right?

“It’s extremely fast. When I was first diagnosed, they said it would take three months. With physio tape and the support, I could ski again after just a few weeks. Of course I didn't want to push it too far or injure myself again; I just wanted to know how quickly I could ski again and whether I could do it without pain. That was very important to me.”

Why is it so important for competitive athletes to not have a long break from training?

“For skiers, it is mainly due to muscle atrophy, which can then cause additional instability and imbalance. That is why it is important to return to being active as soon as possible after a break. This prevents me from straining my body and allows me to regain confidence and stay in rhythm.”

How do you train during the snow-free season?

“I complete two strength training sessions five days a week with squats, lunges, step-ups, leg presses and core training. On Saturday, I usually have endurance training such as jogging, mountaineering, cycling or swimming – but there are only a few skiers who swim; for some reason we’re not that good at it. Maybe we only feel comfortable with frozen water. Sunday is a day off from training, but that still means regenerative work, for example a relaxed bike ride. I have also been planning a challenging mountain trek for some time. I'll probably wear the support then, especially when going downhill. It would give me a lot of security and stability, especially on uneven ground or when climbing large rock steps.”

What inspires you about ski racing?

“The last three years have been very interesting because I came second and third in the European Cup in slalom and realised that there is more to it than that. It’s the most difficult piste in the world, the ambience and atmosphere there are something very special – it’s so exciting and thrilling. After I managed a few good positions in the World Cup – my best result was eleven – I knew I could do better. That’s when I was seized by the ambition and desire to be the very best. And then I fight step by step for that, even when I have setbacks like this injury.”

Is your next big goal to win the World Cup?

“At the moment, I have to take smaller steps. I definitely want to get back into the top 30 in the world. The injury meant that didn’t happen this season. But that's the next goal and when I've achieved that, I'm looking to get into the top 15. And when I get there, I see myself standing on the podium – and eventually in first place. This vision motivates me and drives me to keep on training. This can even happen relatively quickly in skiing, but it will still be a tough challenge. I work from race to race and season to season. That's what I keep reminding myself in the gym, no matter how hard it is to keep going.”

Thanks so much for talking to us, Mr Holzmann.

What to do when knee pain suddenly appears? Causes and types

*Genumedi is a knee bandage for soft tissue compression.