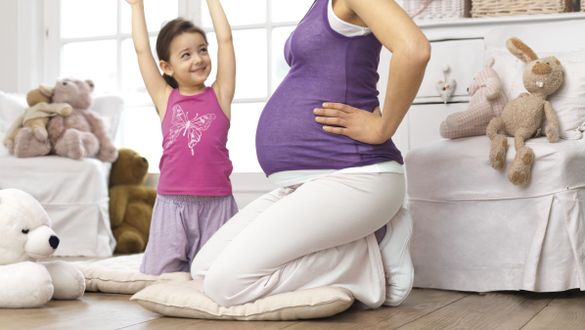 What is a symphysis?

A symphysis is the connection of two bones by fibrocartilage. The best known symphyses in humans are the intervertebral discs and the pubic symphysis. The latter – also known as the Symphysis pubica – is one of the three pelvic girdle connections, along with the two sacrum and ilium joints (sacroiliac joints). They allow a certain degree of mobility in the pelvis. Without that mobility, walking, standing, sitting or lying would not be possible.

What is symphyseal pain and what causes it?

Pubic symphysis separation or pelvic girdle instability can occur, for example, after slipping, stumbling or in the event of strain. Often it also affects cyclists or riders who regularly misuse and/or overstrain their symphysis.

An accident can also cause the symphysis to overstretch or even separate (symphysis diastasis, symphysis tear, symphysis rupture).

Pubic symphysis separation during pregnancy and after childbirth

Pelvic instability with symphyseal complaints is most common in women during pregnancy: the weight changes, as does the centre of gravity. In addition, the pregnancy hormones make tendons, ligaments and cartilage in the pelvis more flexible.

During pregnancy, there can occur pulling in the pubic bone that is usually due to pubic symphysis separation: in preparation for childbirth, the pubic symphysis widens by three to four millimetres. This can cause pain that considerably restricts the everyday lives of pregnant women. After pregnancy, the complaints usually disappear by themselves. If the pain in the pubic bone persists after childbirth, the symphysis can be relieved with various therapeutic options.

Whether due to pregnancy or not – pain in the pubic bone is accompanied by significantly reduced mobility: during movement, pulling forces are generated on the very sensitive periosteum. Symphyseal pain is particularly noticeable when climbing stairs and bending down. The pain can radiate into the hips and legs.

The two sacrum and ilium joints (sacroiliac joints) are often affected. These complaints are often perceived as back pain empfunden.

Diagnosis and therapy for pubic symphysis separation and symphyseal pain

First of all, a careful examination is carried out by the doctor or, in the case of pregnant women, by the obstetrician. If necessary, X-ray diagnostics, ultrasound or magnetic resonance tomography are also used to make a diagnosis.

Various treatment options exist for symphyseal pain, especially for pubic symphysis separation. The decision on the necessary therapy is made on the basis of the complaints and the imaging findings.

The most important step is initially the stabilisation of the pelvic girdle. In any case, patients with symphyseal complaints should take it easy. Gentle back training and pelvic floor exercises can be helpful after consulting with your doctor.

Physical measures include, for example:

* Absorption of medical substances through the skin using a weak electrical direct current.

Patients should not move jerkily, should not hop, and should not spread or lift the stretched leg. At night, a pillow between the knees can be helpful for stabilisation.

Tip: If you’re pregnant and suffer from symphyseal pain, please consult your maternity nurse. She will show you exercises to strengthen the pelvic muscles. This helps to stabilise the pelvis and thus relieve the symphysis.

In the event of a symphysis tear, the pelvis is immobilised. Bed rest and stabilisation with a pelvic or symphysis belt allows the cartilage to mend. Your doctor will decide if you need to use a pelvic belt. Surgical stabilisation of the symphysis by an orthopaedic surgeon is very rarely necessary.

When the orthosis is used, it reduces the tension in the abdomen, which in turn relieves stress on the abdominal wall, pelvis and lumbar spine and can alleviate pain.

And after the pregnancy? Sometimes the symptoms still persist even after the pregnancy. In this case, the pelvic support Lumbamed sacro offers effective stabilisation - also in the case of pelvic ring instability and pain, which are, for example, attributable to sacroiliac joint syndrome. .

Tip: These medi products support you both during and after pregnancy.

Fit and active during pregnancy

Lumbar support for stabilisation during pregnancy

How to support your back, abdomen and veins during pregnancy

Your doctor makes the diagnosis and decides on the therapy. If necessary, your doctor can prescribe wound therapy products. The patient is advised by trained personnel (e.g. in a medical supply store, pharmacy, wound centre). After this, the patient receives products that are customised to meet their individual needs.