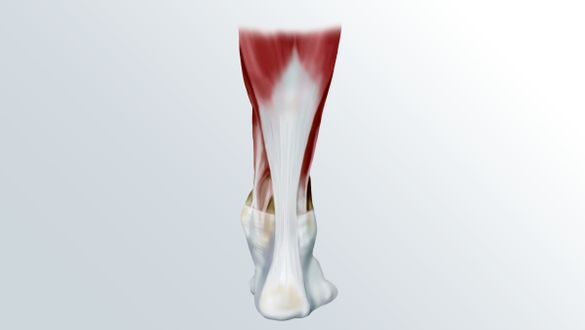 The Achilles tendon – the strongest tendon in the body

The Achilles tendon transmits the power of the calf muscles to the foot and plays a very important part in rolling over the foot. A force equal to eight times your own body weight acts on the tendon when you run. This clearly shows how important a stable and healthy Achilles tendon is in withstanding these stresses. Symptoms occur most often when the tendon is overworked or generally weak.

Sports injuries are the most common cause of ruptures of the Achilles tendon.

Symptoms of rupture of the Achilles tendon

The symptoms of a rupture of the Achilles tendon can be:

A so-called tendoplasty is performed if the tendon shows severe pre-damage due to wear-and-tear. This is followed by several weeks' immobilisation of the leg with the foot in a tiptoe position. After about four to six weeks, the patient starts physiotherapy with progressive correction of the tiptoe position. A low heel lift should be worn for temporary relief of tension on the Achilles tendon.

A tear in the Achilles tendon is often treated conservatively, because a torn tendon grows back together on its own. However, with limitations: the Achilles tendon usually remains shortened and the transmission of power to the foot cannot be restored 100%. This is why doctors decide to sew the tendon together in some cases.

Therapy after the operation

After the operation, the leg must be immobilised for about four to six weeks. This is followed by physiotherapy to stretch the tendon slowly again. In many cases, a low heel lift is added for temporary relief of the Achilles tendon.

Another alternative is so-called postoperative functional follow-up treatment with a special boot.

The medi ROM Walker from medi promotes an early functional mobilisation of the patients. The leg shells and the circular configuration of the hook and loop straps ensure a controlled compression. Its special rocker sole promotes a physiologically correct gait. The ROM Walker* can be adapted individually.

Incidentally, it can also be used to support conservative treatment without an operation.

*Lower-leg foot brace for mobilisation with an adjustable range of motion.