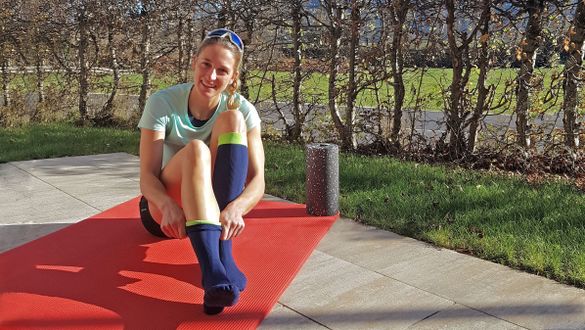 “The medi Rehab one* has afforded me optimal support without being restrictive.”

“Grias di” or “Hi there!” Vanessa Hinz is an Upper Bavarian through and through. This Schliersee native was practically born with her skis on. The best prerequisites for the DSV biathlete to turn her hobby into her dream job. “I can’t imagine any other life for me right now,” she reports in the interview. The 28-year-old doesn’t let forced breaks get her down. During pre-season training she suffered an ankle injury. To get back to the training as quickly as possible, the medi Rehab one­­* medical compression stocking supported her in the rehabilitation – in more ways than one: It made her feel secure, it counteracted oedema formation, it sensitised her to her injury, and it gave her the leeway she needed as an athlete.

Vanessa, at the end of August you tore the lateral ligament in your left ankle. How did it happen?

“I was jogging in the afternoon and, running downhill, twisted my ankle. As an athlete, this happens often, but I felt right away that this time it was more than just a slight ankle twist. I cooled my foot off in the nearby Traun river and then jogged home. The next day, I had severe pain and was unable to move my foot, so I went to the doctor right away. The MRI delivered the diagnosis: Lateral ligament tear. You could almost preface that with ‘only’; I was glad that the syndesmosis ligament was not also affected. I was still shocked, because instead of one week of healing – as I had assumed after incurring the injury – there were several.”

And so, with that, the next thing on the agenda was –

“A holiday”, she laughs. “Normally, I would have competed in the German Championships and had a few days off afterwards – so I just decided to bring my holiday forward. I wasn’t allowed to put any weight on my foot for the first two weeks, so putting my legs up was ideal. In the beginning, I wore a boot-like walker for protection, then just a splint and crutches because I was still in pain when walking for a long time.”

When could you start again with light training?

“After roughly two weeks, with some cycling and classic skiing. That did me a world of good! As an athlete, you need the exercise, and I missed that a lot during my compulsory downtime. On the treadmill, I took things nice and easy for the time being, as I had no idea if I could manage twisting my leg to take any curves on a run. The medi Rehab® one* has helped me plenty in this regard.”

You initially had a splint. How did the medi Rehab® one* differ?

“The splint was used to limit potentially damaging movements. But it also forced me to take things cautiously. And I couldn’t slide into the tight-fitting cross-country ski boot either. The combination solution of medi Rehab® one* and tape was ideal for me. It wasn’t a complete cut-off to run without a splint, but I felt safe.

If my foot swelled under the stress, the medical compression stocking counteracted the formation of oedema. The Rehab® one* supported me without any restriction. That being said, the compression reminded me of my torn lateral ligament. That was especially important towards the end, because I no longer had any pain, meaning that you quickly forget your injury.”

What is important to you about an aid?

“That it supports me, reminds me of my injury in discreet fashion, but doesn’t restrict me too much – just like the medi Rehab® one*. Its effectiveness is the most important thing, but looks also play a role, especially for me as a woman. The Rehab one* is also a great fit in terms of fashion.”

How did the donning work with the Rehab one*?

“Very well, as I already wear the compression products from medi and CEP. At the beginning of the ankle injury, I couldn’t bend my foot and the slightest movement to the right or left hurt. But Achim, my contact at medi, showed me how to put on the Rehab one* with ease. The stocking was a great fit, so it was no problem for me.”

How did the merino wool feel to you in the forefoot and midfoot?

“I found the stocking to be nice and warm, even though it’s so thin. It was very, very pleasant to wear. Temperatures swung between summer heat and autumn cool, and the medi Rehab® one* was a perfect intermediate solution. I didn’t sweat as much on the hot days and had warm feet when it was cooler.”

Did you wear the medi Rehab® one* 24/7 or only for specific training sessions?

“In part. I wore it for training pretty much all the time. Otherwise, I listened very closely to my body. When I was unwell, or when I wanted to stimulate the lymphatic system or needed that feeling of security, I put it on. I took a “middle of the road” approach – I also took it off from time to time to briefly get back that feeling of no longer having an injury. I wore it for about six weeks in total. Now it’s only when we travel or I’m in the car for long periods, because I find it very comfortable to wear.”

During the acute phase, the medi Levamed stabili-tri** also supported you. Why did you wear the orthosis in combination with medi Rehab® one*?

“I had switched between different providers, and the Levamed stabili-tri from medi appealed to me the most. The orthosis has a stabilising element at the back, which kept me from twisting my ankle. With the Levamed stabili-tri**, my mobility was limited, which gave me the sense of security I needed, especially at night. This is because, without an orthosis, I once felt a sharp pain at night when I moved my foot simply as a reflex.”

Biathlon takes up a lot of time. Is there still time for other activities?

“Yes and no. Biathlon is a full-time job that knows no weekends or holidays. Nevertheless, I take time out every now and then – for shopping, reading or in spring for other sports, like the triathlon. I really love that! We’re lucky as biathletes to be able to do so many sports that also help us in our own discipline.”

Competitive sport and an injury require plenty of discipline. What is your “Vanessa Hinz success formula” to get you motivated?

“My favourite quote is: ‘Never underestimate a person who takes a step backwards. They might just be taking a running start.’ Every cloud has a silver lining, even if you may not see it yet. Everyone has to take a step back sometimes, but it’s important to move forward again. I’ve made it through the season well in the last one and a half years, but now I’ve also been hit with a torn lateral ligament. The healing process went very well, and I barely missed any training. In the meantime, I got back into pre-season training and completed some good tests.”

Last season, you won silver with the team and in the individual category at the World Championships. Was that the highlight of your career so far?

“Yes, just the individual medal! We’ve won the relay on several occasions, but the last season was mixed and the other nations are getting stronger and stronger, so this silver medal in the relay was a highlight. The World Championship gold medal with the relay team in Kontiolathi in 2015 remains an unforgotten moment. We were the underdogs at the time, nobody thought we could win – it was an incredible feeling!”

And long may it continue in the coming season! Thank you very much, Vanessa, for such a great interview. We hope you enjoy an injury-free season and plenty of success!

** Levamed® stabili-tri is an ankle brace for mobilisation in a defined position, parts can be removed.