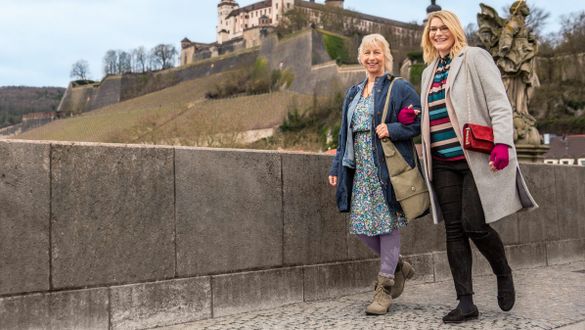 After the operation came the lymphoedema – and compression

Ursula Thomé won the mediven flat knit creative competition for the new fashion element. The prize: A day of shopping with fashion blogger (www.lipödemmode.com) and outfit expert, Caroline Sprott, and €300 spending money. We accompanied the two of them on their stroll through Wurzburg.

You could write novels with stories from Ursula’s life: She plays bass in two rock bands, teaches aerobics classes and tutors in Latin, has three children, volunteers in a nursing home and rides a motorcycle – to name just a few examples. “In the past, my husband and I travelled through Europe working as musicians, for a while with our children. We have always lived life intensively”, explained Ursula. This positive attitude really helped her when she fell ill three years ago.

She felt weak, had pain and developed heart and kidney problems. In 2017, she was diagnosed with an endocrine tumour in her abdominal region. This was followed by two operations, weeks of hospitalisation and daily encouraging letters from her husband. After doctors had removed many lymph nodes and the entire omentum (the network of lymphatic vessels in the abdomen), lymphoedema developed on the abdomen, groin and thighs. Her health insurance provider initially rejected compression treatment. “Through Caroline’s blog, I learned it was possible to appeal”, said Ursula, with Caroline visibly proud that her commitment has helped others affected.

Ursula has worn flat knit compression bandages for a year. “I initially chose black thigh-length stockings and cycling shorts, as well as tights in grey with the “animal” fashion element.” She sometimes still has pain and numbness in her legs, but feels much better now. She is passionate about compression and encourages other women to open up about the topic. “Compression really helps. Anyone who wants to be discreet can wear black stockings that look like normal leggings”, said Ursula resolutely.

She became really fired up when she discovered the fashion elements. “It was like a door had opened. Colourful stockings to go with a mini skirt, wild patterns – just my style!” They also go with the outfit she has put together today with Caroline. She quickly fell in love with a summery dress with a floral print, followed by a denim jacket, a denim dress and green shoes – Ursula is completely satisfied. 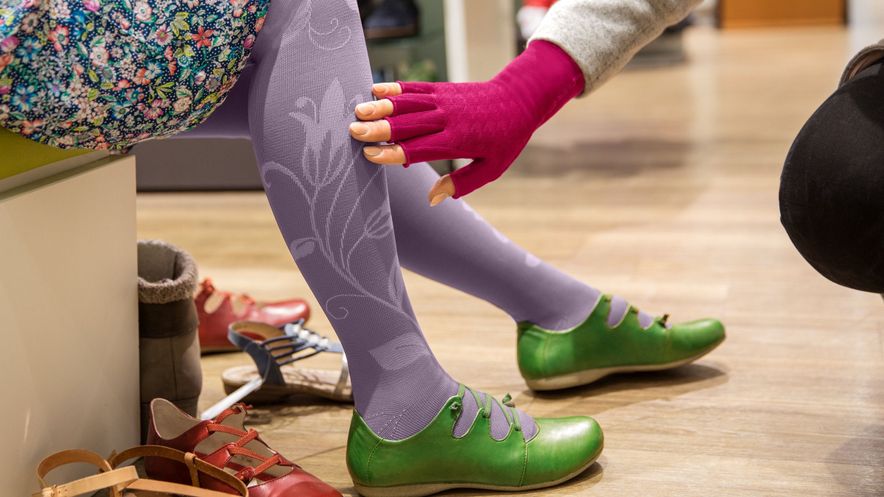 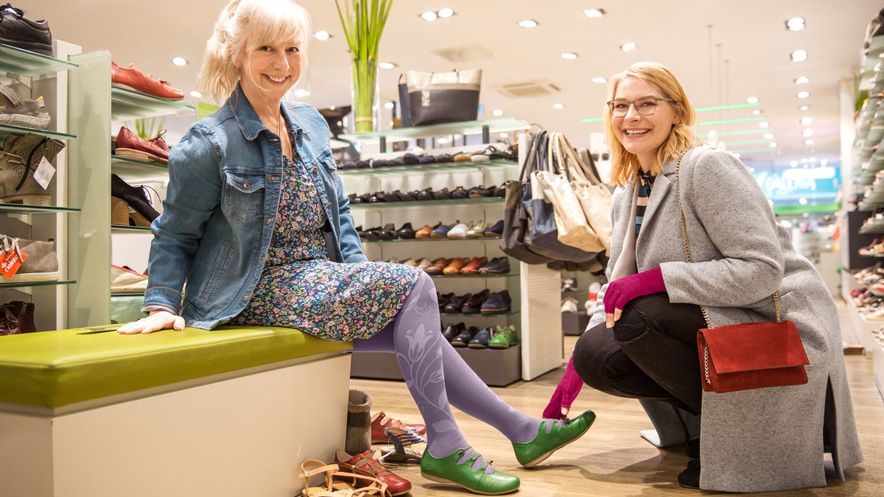 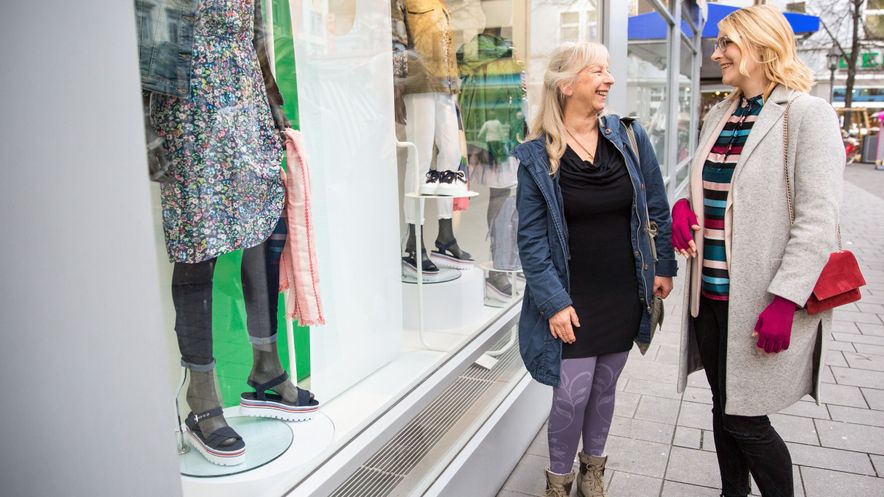 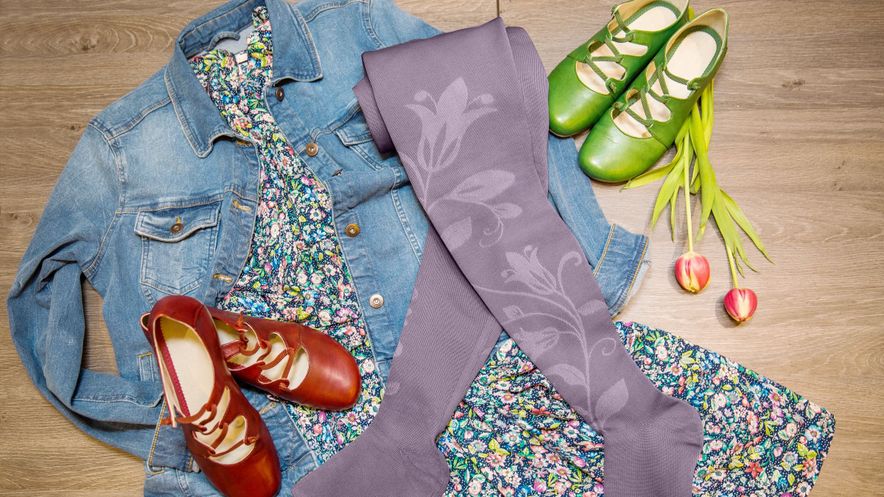 Ursula confronts small hurdles with her talent for improvisation: “Living in the countryside, it’s hard to get lymph drainage twice a week. But aqua fitness is a good substitute!” She shared this positive attitude with Caroline, who explained: “Of course everyday life would be easier without oedema. But your focus should still be on the beautiful things in life.” For Caroline, it’s about her blog and trying out new things – for example, she is currently learning Japanese. For Ursula, it’s music and her voluntary work. She added: “It helps to have role models like Caroline, who share their personal experiences and knowledge that every newbie would otherwise have to struggle to learn to their own.”

When asked about a personal motto, Ursula replied: “Most of the time it’s ‘carpe diem’, but I plan my life a bit, too. Lately, I have been marking down nice moments on the calendar to make me appreciate them more. My illness makes me even more aware that happiness is not a permanent state of being and that you have to actively collect special moments.” Ursula already has her next moment of happiness in mind – she is planning a trip to Scotland with her husband.

Winner of the flat knit creative competition: A tattoo inspired the winning pattern

As Ursula held the stocking with her motif in her hands, she blinked back a few tears of emotion. “I saw a girl with a tattoo of a flower tendril running from ankle to hip. When searching for new patterns for my next order, I came across the creative competition. It’s simply amazing that my pattern has been made a reality!”

Caroline is also a fan of colours and patterns that she shows off in her fashion choices. “An accessory or item of clothing, such as a handbag or belt, should match the colour of the stocking. This gives the outfit a sense of harmony”, is Caroline’s fashion advice to Ursula, who selected a shopping trip in Wurzburg. “I live near Rothenburg ob der Tauber, so Wurzburg is nearby. I like the city, and my daughter works here in the Juliusspital”, said Ursula when explaining her choice. The next morning, she purposefully led Caroline through the hospital park in the inner city, across the Main and from second-hand shops to department stores. Among other things, Ursula studied art history and explained the charming architecture and history of Wurzburg to Caroline while strolling through the old town.

Learn about the colours and patterns of the mediven flat knit range.

Caroline Sprott: story of a patient with lipoedema

Patterns and colours for the treatment of oedema