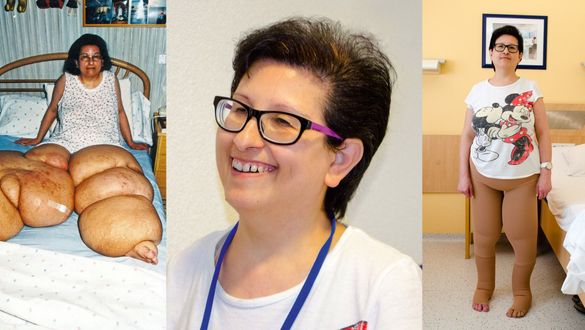 When the Spaniard Maria Bordonado arrived at the Lympho-Opt Klinik in Hohenstadt, Germany for the first time, she needed several helpers to lift her out of the ambulance. She could hardly move due to her elephantiasis, the most severe form of lymphoedema. Her right calf alone had a circumference of 62 inches. That was in January 1999.

Marie stayed at the clinic for six months. Thanks to the consistent treatment and the return transport of lymph fluid that this achieved, she lost more than 190 lbs from her legs alone. She was back in Franconia in the spring of 2014 for the third time - she came for follow-up treatment, this time travelling by air without any help from others.

Dr Franz-Josef Schingale has known and been treating Maria for 15 years. He was not only satisfied with his patient's condition, but was also deeply impressed by her iron self-discipline. "Maria was last here as an inpatient at our clinic in 2006. It is fantastic how she has maintained the outcome of her treatment since then. Over the last eight years, she has only accumulated 3 pints of fluid in her left leg. Her right leg has stayed just as it was. When one considers that she has no manual lymphatic drainage at home in Spain, that she bandages herself and treats herself with automatic intermittent pneumatic compression (treatment with pressure cuffs, Lympha Press-System) and compression stockings (mediven), she is in wonderful condition".

However, Maria, who is now 48 years old, had toiled along an arduous path for decades until she achieved this positive diagnosis. The first symptoms of lymphoedema started shortly after her first communion at the age of nine. Maria Bordonado remembers: "My feet and knees kept growing thicker and thicker. None of my shoes fitted me anymore. At first I thought nothing of it and my parents believed it would pass". But the swelling got worse instead of better. Maria's parents consulted their family doctor. But he could not help and thus began her years-long odyssey around innumerable doctors' practices. Nobody could offer her a solution. While her friends finished school, found a job and started families, Maria Bordonado's lymphoedema fettered her to her bed. For more than 10 years, her living space was restricted to the bedroom and the bathroom. With those legs, she could not walk any further. It took too much effort. She also dreaded the looks she was given in public. The only social contact she had was with her family, who comforted her and offered her support over the long years.

The turn for the better happened in 1998, when a Spanish doctor published Maria’s medical history on the Internet. This caught the attention of Nati Velázquez, manager of medi’s Spanish office. medi is one of the leading manufacturers of medical devices and is based in Bayreuth, Germany. She forged the contact with Dr Schingale, who was confident that Maria could be helped.

The Spanish health insurers refused to pay the cost of treatment, but as soon as medi’s employees and management heard the story, they spontaneously decided to help. The budget that had been allocated for the yearly customers' Christmas gifts was summarily diverted for Maria Bordonado's treatment. The general public also provided a financial boost. A number of German TV channels reported on the Spaniard's affliction and called for donations to enable her to have treatment in Franconia. By the end of January 1999, everything was in place: Maria was transported lying by ambulance for about 1,242 miles from her home near Alicante to Hohenstadt. Her treatment could begin.

After six months of daily lymphatic drainage, intermittent pneumatic compression (IPC with the Lympha Press-System), mobilisation treatment and compression garments, Maria’s ambitious target was finally reached. She could walk again. The circumference of her calf was reduced from 62 to 20.4 inches. This was her new start in life.

Successful treatment thanks to networking

Such an excellent result can only be achieved if there is a perfectly coordinated interaction between doctors, therapists and surgical appliance experts. Although there is still room for expansion regards this network in Germany and there are too few experts in all the areas mentioned (nationwide in Germany there are about 450 lymphologists and around 60,000 trained therapists), an international comparison shows that Germany occupies a leading position in caring for patients with lymphoedema. Maria Bordonado can confirm this. She and the other patients at the Lympho-Opt Klinik profit from such networking.

After Maria Bordonado had lost almost 4.5 pints of lymph fluid thanks to her treatment, she was measured again towards the end of this year's stay. As 15 years previously, the lymph expert Cornelia Wilhelm from the neighbouring surgical appliance retailer took the measurements. She too was impressed by Maria Bordonado’s condition. "Her calves have become really thin. She has tremendous self-discipline, and co-operates actively in her treatment". To make sure that her present condition is maintained for as long as possible, she was then fitted out with multi-part garments consisting of toe caps, thigh-length stockings and Capri shorts from medi. This hosiery ensures higher pressure and wall stability and simplifies donning and doffing in day to day life.

Is it now enough for the Spanish patient to treat herself at home and come to Germany every few years for follow-up treatment? The experts treating her are confident: if anybody can do it, she can. "I am certain that she will be able to maintain the outcome of her treatment", says Cornelia Wilhelm. "She has already shown this in the past. In addition, wearing the compression garments will improve her body’s contours even further. All of us in our lymph network wish her the best of luck in future.

Elephantiasis: information on the clinical picture and treatment options