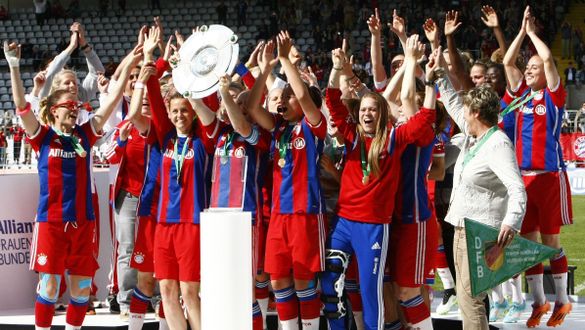 Katharina Baunach, born in Würzburg, can already look back at an extraordinary career even though she is still only 26.

The crowning glory was her "masterpiece" in 2015 when she celebrated the Champion's title with FC Bayern Munich's women's team. In fact, the team celebrated twice that year, as the men claimed the title as well. In this interview, the defence player tells about those moving moments at the victory celebrations on Munich's Marienplatz and how she plans her comeback after her injury in April.

Ms Baunach, how did you come to start playing football?

My brothers fired my enthusiasm for the sport. I started playing at the Sieboldshöhe Post Office Sports Club in Würzburg at the tender age of five. At 14, I transferred to SV 67 Weinberg and I've been at FC Bayern Munich now since 2006.

Quite simple, that had always been my dream, because I've been an avid Bayern fan for years! So when the club rang me, I said yes without a moment's hesitation, there was just no question. Beside Lionel Messi, my idols also include Franck Ribéry and Thiago Alcántara, who also plays for Bayern.

This season you claimed the title of German Champions with FC Bayern Munich, just like the men did. How did you feel about that?

The last match day was just indescribable. To be standing there in the stadium, holding the champions' cup in my hands, that's an incredibly intensive feeling. Add to that the victory celebrations together with the men's team in Munich's Marienplatz, I'll never forget it. We all celebrated together on the town hall balcony and the reception that the 15,000 fans gave us was totally overwhelming. I was overjoyed and deeply moved at the same time. I will never forget that time with the celebrations, the gala dinner the evening before and the fact I was able to stand on the balcony together with Thiago. Karl-Heinz Rummenigge had already promised us that beforehand, but it exceeded my expectations by far.

You're still injured, you wore a knee brace for the celebrations. How did that happen?

It was an accident I had while I was warming up for a match in April. I jumped up into the air and collided with another player, the injury occurred as I landed. It all went very quickly and I really can't say exactly what happened. In the end, I had to have a meniscus operation and ever since then I've been walking around on crutches and wearing a brace, for rehabilitation too. Of course, it's extremely important for me as a professional athlete to get back on my feet as quickly as possible.

Where did you have treatment and what do you have to keep your eye on as a professional footballer?

Dr Rembeck operated on my knee at his clinic in Munich and I stayed there for another two and a half days after the surgery. Dr Rembeck knew about my knee's medical history and I trust his expertise. I am very satisfied with the operation and, thus far, the knee's healing exactly according to plan. I have also been given the best possible help for my individual situation. My crutches and the knee brace relieve harmful strain on the knee and help it to heal, because my knee is stabilised and protected from any accidental wrong movements. So I can concentrate on getting fit again. That's my most important goal at the moment.

What's the plan for rehabilitation?

At the moment, I'm mainly training my upper body, because I still have to be careful with my knee. But I just can't do without sport altogether, otherwise I’d go crazy. We don't know yet how long the rehabilitation will take; that remains to be seen over the next few weeks. I've been wearing the knee brace 24 hours a day since the operation. Now I'm allowed to bend the knee to 45 degrees again, so that's good progress. And of course I have to stay fit. As soon as I'm 100% fit again, I can start playing again and reclaim my old position as defender.

Are you satisfied with the brace?

Yes, I wear it all day and all night and I just know that my knee is safely "packaged".

Thanks to the many championship victories by the German women's football team, the sport has become ever more popular in Germany. Who is your favourite for this year's World Championship in Canada?

That's obvious, the German team! They're a championship team, the girls always manage to go one better each time. Four of the German players come from my team at Bayern. I'm looking forward to it tremendously and I'll keep my fingers crossed for the team. But with all those new teams who are competing for the World Championship, it's going to be a very challenging and demanding time. Of course, my long-term goal is to play in the German national team again.

Ms Baunach, we wish you a speedy recovery and thank you for the interview.

Health personnel will make the diagnosis and can prescribe medical aids, e.g. from medi if necessary.
Your medical retailer will fit them individually for you.

Causes and treatment options for a meniscus injury

To stabilise knees after an injury