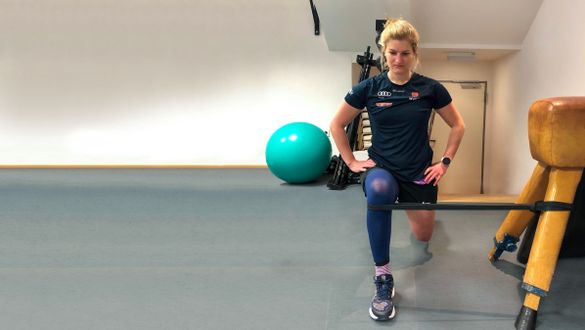 “I know what I can do and I want to take it to the next level!”

The 26-year-old German Ski Association (DSV) skier Marlene Schmotz knows all about sporting comebacks. 2015: Ankle injury. 2017: Injury to the anterior cruciate ligament. Again and again, she fought her way back into the World Cup rankings with determination and ambition. The DSV athlete, who achieved her greatest successes to date with her medals at the Junior World Championships in 2015, is now facing a new challenge. At the beginning of 2020 she sustained an injury at the World Cup race in Zagreb. Diagnosis: Cruciate ligament tear. Nevertheless, this young athlete – who is considered a talent in the technical disciplines – is not giving up. Her greatest motivation: she knows what she can do, and wants to build on it and take it to the next level. Alongside her sporting ambitions and therapeutic treatments, medical aids support her recovery – even before the operation. Marlene Schmotz wore the medi Rehab® one medical compression stocking to reduce oedema in the knee. The stocking has integrated quickly into her daily (therapy) life.

Marlene, you tore your right cruciate ligament in the World Cup race in Zagreb in early 2020. How did you pick up this injury?

“I was leaning back slightly as I gained momentum, which made me lose control of my outer ski. This resulted in increased pressure on the knee and a twisted angle – and therefore the injury. The impact that followed had nothing to do with it.”

How were you treated after the fall?

“My physiotherapist was at the World Cup race and examined the injury on the spot. My knee swelled up immediately. The next day I had an MRI. Diagnosis: torn anterior cruciate ligament and medial collateral ligament. The season was over, and I had to have an operation instead.”

Your therapy started even before the operation. What was your daily therapy routine like?

“At the beginning I had to rest and make sure that the lack of exercise did not cause too much lymph fluid to accumulate. The lymph was stimulated in a targeted manner in order to transport this away. I received electricity treatment three times a week as well as occasional lymph drainage. I also had physiotherapy two to three times a week. After a few days, I had to mobilise the knee joint again, because movement is important to counteract a relieving posture. To do so, I did exercises for the joint.”

You were prescribed the medi Rehab® one* compression stocking even before the operation. How did the medical aid contribute to your recovery?

"Rehab® one* supported me even when my movement was restricted and I was forced to spend a lot of time sat down. It reduced the swelling in my knee. It was fully integrated into my daily therapy routine. I put the stocking on after getting up in the morning and took it off in the afternoon when I rested on the sofa. Apart from that, I wore it all day long, even during my exercises, until I went to bed at night.”

Is it important for you that a medical aid integrates well into your everyday life?

“Definitely! The Rehab® one* is very comfortable to wear. Sometimes I even forget I have it on. Often I no longer notice any difference between the healthy and the injured leg. I also like the colours – the Rehab® one* looks great. These are two features that are very important for me with a medical aid – the Rehab® one* combines them perfectly.”

You also wear the M.4s® comfort** knee orthosis for additional support during recovery. Does it make you feel safer?

“The orthosis is like a kind of safety device for anyone who is unstable due to injury or surgery. When I wear the orthosis, I notice it immediately. I particularly like the fact that the flexion and extension can be flexibly adapted to my therapy. The range of motion is specified by my doctor – I can then safely put weight on my knee within this range.”

Would you like more information about the knee orthosis M.4s® comfort**? Find out here:

After your regeneration comes the next World Cup race – what are your plans for the coming season?

“Small steps, I think – healing is the priority. I look at it day by day. Too much pressure would not be good for healing. If everything goes to plan and my knee recovers quickly, I have my sights set on the coming season. After the last one, I know I can do well – I want to pick up where I left off and take things to the next level.”

Marlene, we wish you all the best for your recovery and the new season! Thanks for talking to us!

** M.4s comfort is a brace with a frame that is intended to reinforce and stabilise the knee joint using limitation of extension and flexion.