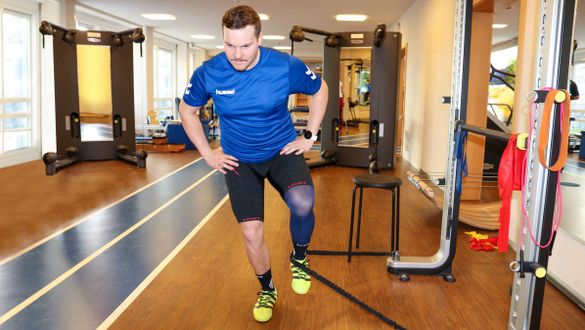 “What motivates me? Always pushing myself to my limits and achieving my best!”

His grandpa Ludwig am Jenner taught him to ski. Today, 25-year-old Christof Brandner from WSV Königssee, counts Downhill, Super-G and Alpine Combined among his favourite disciplines. The fact that speed is in his blood was demonstrated by his fourth-place win in the 2019 European Cup downhill race on the world-famous and infamous Streif, which is one of the most difficult downhill runs in the world. The third-place German champion, who finished second in the European Cup overall ranking for downhill in 2019, also loves off-piste challenges. After a cruciate ligament tear, he fought his way back into the World Cup. His perfect recovery process? A combination of therapy and medical aid. The medical compression stocking medi Rehab® one supported the reduction of the oedema after the operation and in rehab, so that he can restore his astonishing speed next season, in keeping with his sporting mentality.

Christof, you injured yourself during a training run at the end of 2019. Diagnosis: cruciate ligament tear. How did that happen?

“For the Combined, I trained slalom at Pfelders in South Tyrol. During my third run, there was a point when I didn’t have an optimal angle; my upper body twisted and I heard a clicking sound. The next moment I was lying in the snow. It was strange because I wasn’t in pain. That was at the end of November 2019, around 6 p.m. How do I remember so exactly? Two years before, on almost the same day at the same time, I had torn my syndesmotic ligament and medial collateral ligament in my knee!”

How were you treated right after the accident?

"We didn't have a physiotherapist with us in Pfelders, so we decided to go immediately to the clinic in Munich. The investigation confirmed my suspicions: a cruciate ligament tear. I was operated on very quickly – and the pain afterwards was worse than I had ever experienced before. My knee was also very swollen at first.”

After that you went to rehab – what did a typical day look like?

"As is fitting for an athlete, my day began at 7:40 a.m. before breakfast with an exercise activity: cycling! The rehabilitation measures continued in the afternoon: from manual physiotherapy and leg strength training on an unstable surface to core and movement drills. The focus was always on strengthening my knee.”

You wore the medi Rehab® one* compression stockings for post-operative support. How did the medical aid affect your recovery?

“At first after surgery, I wore the stocking almost 24/7, which quickly reduced the swelling. During rehab the stocking supported me mainly during training, even in the mornings when I went on the bike.”

How did the medi Rehab® one* feel on your knee?

“It was an integral part of my daily routine and from the very beginning it just felt like a normal stocking for me, because it is very comfortable to wear. I pulled it over my knee and made sure it was in place. The ribbed structure and positioning aid at the knee make the Rehab® one* really easy to put on and take off.”

What are the characteristics of an optimal aid for you?

“For me as an athlete it is crucial that I can't feel the aid, but at the same time, I have to know that I can rely on it absolutely – and the Rehab® one* achieves that. It fits perfectly, doesn’t slip during sport and is super comfortable to wear.”

After rehab you continued to work on the stability of your knee. What was the plan?

“I trained a lot with my physiotherapist – up to six hours a day. Now it's time to gradually build it up and get back into team training.”

That requires a lot of discipline. How do you motivate yourself daily to get back to the top?

“Motivation plays a major role in competitive sports. I am good at what I do and I like to push myself to my limits – that’s what drives me. I like to maximize my performance even in training. I like going to the limit – not only in sports, but also in my free time. I just have this athlete’s mentality in me.”

So, you don’t see the injury as a setback, but will continue to push ahead at full power?

“Definitely! I have my sights firmly set on the coming season and will go to my limits to get the best out of myself and my body.”

Christof, we wish you all the best and great success in the next season! Thanks for talking to us!