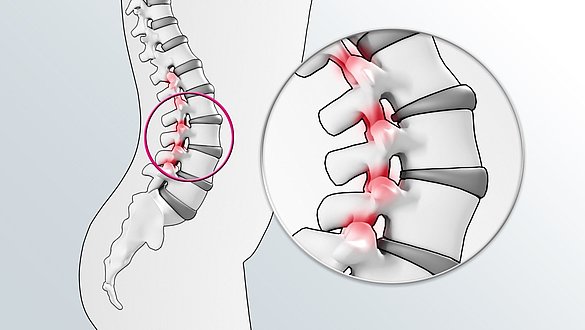 The anatomy of the facet joints

The articular (joint) surfaces of the facet joints are about 1.5 cm wide and high and have a slightly oval shape. They are covered by a thin layer of cartilage and are surrounded by a connective tissue joint capsule. On the inside of this capsule, as in all other joints too, there is a mucous membrane that forms the inner lining of the joint, the synovial membrane. The function of this is to lubricate and supply nutrients to the articular cartilage.

The illustration on the left shows the lumbar spine seen from the side. The abdomen is to the right of picture, the back to the left. The joints between the vertebrae (facet joints) that connect one vertebra above with the one below are shown in red.

Function of the facet joints

The intervertebral discs lie between the vertebral bodies and connect them together. The combination of the soft, but tumescent elastic nucleus and the tough fibrous ring that surrounds it enables the disc to absorb and transmit the forces that act on it. Thanks to their box-like shape, the vertebral bodies can bear these forces. The facet joints bear up to 20% of the forces that act vertically on the spine.

Types, causes and treatment of back pain

Strong back - a better life