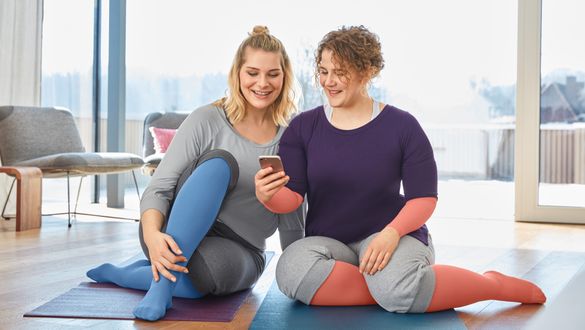 More than three million people practise Yoga in Germany. Another nearly eight million already have experience with yoga.1 Yoga thus ranks 20th among the most popular leisure activities.2 Yoga, which originated thousands of years ago in India, takes a holistic approach: bringing body, mind and soul into harmonious unity. The ultimate goal is self-awareness, which often improves physical well-being. Yoga makes you fitter, more flexible and more relaxed. Surely one of the reasons why UNESCO declared it an intangible cultural heritage in 2016.3

Dozens of yoga styles have been established over the years: from tranquil yin yoga to sweaty power yoga to Bikram yoga, which is practised at a room temperature of 40 degrees Celsius and 40 percent humidity. A variant of Hatha yoga is generally well suited for patients with lipoedema or lymphoedema. It is characterised by the extensive practise of various yoga poses, also called asanas. The transitions between the asanas are often fluid. Yoga stimulates metabolism, supports lymph drainage and strengthens the muscles.

It trains our strength, flexibility and sense of balance. Yoga is also a very meditative activity: it gives us moments of well-being that likewise benefits our mental health. Yoga is particularly practical because it generally lets you decide the intensity of your movements. Those interested should nevertheless consult with their doctor in advance about how to fit yoga into their therapy plan.

All you need to start yoga is an exercise mat and a comfortable outfit. Although a yoga block is often used as an auxiliary aid, a stack of books will also do to start with – an extra-thick encyclopaedia will suffice. If kneeling hurts, put a small pillow under your knees. If possible, compression stockings should also be worn during yoga, as is generally the case with exercises. They support the muscles and increase the removal of lymphatic fluid.

On-line courses are a good way to gain initial experience. If you take a liking to yoga, you can take a free trial lesson in a yoga studio. Many health insurance companies subsidise yoga classes. Exercise is nevertheless only one of several measures used in oedema therapy. Self-management, consistent compression, skin care and, if necessary, lymphatic drainage are equally important for success.

Medical aids made in Germany

Improving the quality of life